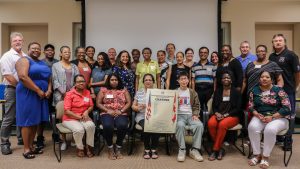 The group of executive officers and 23 stewards, organized in April of this year,is the biggest organizing victory in Canada in several years.

“They are a very eager group,” explained Ralph Martin IAM Grand Lodge Representative. “They want to learn but this will take time, so this was the first step and like all first steps, there was some hesitation by the members because this was unchartered territory, but they pick things up quickly.”

IAM International President Bob Martinez also took the opportunity to administer the Oath of Office to the new interim executive officers of Local Lodge 1231 and all of the Stewards attending this week.

“We are pleased and privileged to have these new members at our training centre,” said a proud IAM Canadian General Vice President Stan Pickthall. “They’re here to learn how to do their best to represent their membership and our training centre provides the best Union education in the world.”

The IAM (International Association of Machinists and Aerospace Workers) was formed in Atlanta, Georgia in 1888 and its first Canadian Local Lodge, Local Lodge 103 was formed in 1890 in Stratford, Ontario.

We represent more than 40,000 Canadian workers in air transport and a wide range of manufacturing including aircraft, auto parts, buses, aerospace, electronics, light and heavy machinery, tools and appliances. We are the largest airport security screeners union in Canada. The IAM also represents a growing number of workers in the health care and hospitality sectors as well as office, technical and other white collar workers.

The total North American membership is 600,000.